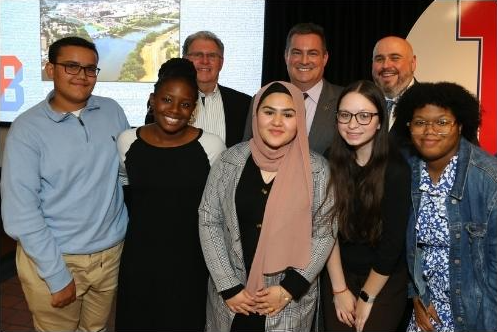 It’s always nice to see Binghamton City School District graduates move on to big things after receiving their diploma, but it feels even better when they return to where it all started!

That’s one of the greatest aspects of the Binghamton City School District’s annual Distinguished Graduates Dinner, and the 2022 edition was no different.

Held at Binghamton High School on Thurs., Oct. 13, five notable alumni were honored in the city where they got their start. Highlighted by plenty of student musical performances, the distinguished graduates were given the warmest of welcomes back home.

Photos from the dinner can be viewed by clicking here. The distinguished graduates who were honored are as follows:

Aatkin is currently the Senior Vice President, Chief Financial Officer, Treasurer and Secretary of Annuity & Life Re Holdings, LTD, an insurance company which provides financial services including life insurance. Atkin is also the former Executive Vice President, Chief Financial Officer, and Board Member of Security Mutual Life Insurance, which is Binghamton-based and has a firm footprint throughout the Southern Tier.

Ganim is currently the Director of the Institute for the Expressive Arts at Salve Regina University, located in Newport Rhode Island.

Dr. Wanik is currently Professor of Clinical Nutrition at the University of Connecticut. She is also a sports nutritionist for the United States Olympic Committee.

Zell is the co-founder and outreach director of Steel City Improv Theater in Pittsburgh Pennsylvania. In addition to the Distinguished Graduates Dinner, Zell held an improv comedy workshop at the high school on October 14 for students in the Rod Serling School of Fine Arts (Photos)

A massive thank you to all the students and staff who made the event possible, and the distinguished graduates for coming back home!